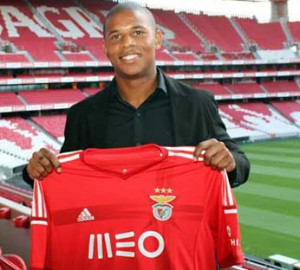 After Friday’s completion of the squad’s physical and medical examinations, and an afternoon trip to the Sagres brewery in Vialonga, the squad had their first contact with the ball at the Seixal this Saturday.

Saturday’s training session, which was closed off to the media, was the first official training session for new signing Luis Felipe. The 23 year old  Brazilian right back signed a deal with Benfica for the next 5 years.  Luis Felipe made his professional debut with Palmeiras,  and went through a few loan spells  before returning to Palmeiras last season. Last season he started the year at Penapolense, but was called to Palmeiras in July where he started in 19 games.  The words “Luis Felipe” and “Right Back” haven’t always been synonymous with success, lets hope this time around Benfica gets it right.

Bahia’s Anderson Talisco will arrive in Lisbon this Sunday to sign with Benfica. Bahia’s official website reveals the club has reached an agreement with Benfica to sell the 20 year old offensive midfielder for 4 million Euros. At 20 years old, Talisco is far from being a finished product, but reports out of Brazil claim he is a very talented youngster and  that he has a big margin of progression.

Enzo Perez got his first first taste of World Cup action this past Saturday in Argentina’s quarter final match against Holland. Enzo came in for the injured DiMaria in the 33rd minute, and played the rest of the game. Portuguese media got a chance to catch up with him after the game, and ask him about his future at Benfica. The Argentine answered by saying that if he had intentions of leaving he wouldn’t have signed a 2 year contract extension not too long ago.  The center mid also made a point to state that the media have been making up stories about him, something that he was not too happy about .

Portuguese media continues to feed the story of  Gaitan and Oblak going to Atletico Madrid. According to “A Bola”, Diego Simeone is an admirer of Nico Gaitan, and has asked the club to sign our Picasso. As for Oblak, he seems to be Simeone’s choice to replace Courtois.  Atletico Madrid gets their season underway this Monday, and will travel to the U.S. on Thursday, they will be looking to wrap up both signings before the team embarks to Los Angeles.

After not being spotted at the Seixal this past Thursday, Stefan Mitrovic seems to be close to signing a permanent deal with Germany’s Friburg. With the arrival of Cesar and the return of Lisandro Lopez, Mitrovic is clearly the odd man out, and Benfica will try to take advantage of his market value after his good showings for Vallolid in the second half of the season.

The team will have Sunday off, and will be back to work on Monday behind closed doors