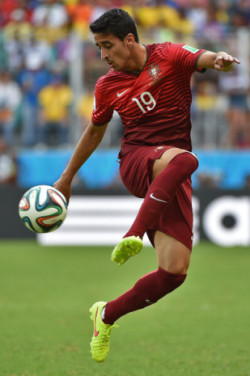 Back in January of this year if you had told Andre Almeida he would not only be called to the Portugal’s World Cup Squad, but that he would also start for the Selecao, he would have probably given you a look of indignation, along with a confident trusting smile. In May, he achieved the first part when he was included in Bento’s 23, this Sunday he should see the second come true.

Born in Portugal’s capital, 23 year old Andre Almeida got his start in Portuguese football in 2005 where he played for Sporting as a 16 year old.  After not being invited to Sporting’s u17 team the following year,  Almeida took his dream of becoming a professional footballer to lower reputation Alverca, where he spent the 06/07 season.  After a good season in Alverca’s  u19 team,  Almeida caught the attention of a bigger club, as Lisbon’s Belenenses plucked him from Alverca for their u19 team.  His performances at a junior level earned him his first professional contract, and his consequent professional debut in the 08/09 season.

After three seasons at Belenenses,  Almeida’s phone rang, on the other side an unexpected voice – it was Jorge Jesus.  Jesus, fresh off winning the Portuguese Championship for Benfica, had coached Belenenses in the year Almeida joined their junior team,  and had been keeping tabs on the youngster’s progress since then, and felt Andre would be a good addition to Benfica’s ranks, albeit as a prospect.

Almeida’s dream of returning to Portugal’s elite finally came to fruition, as he signed a multi-year deal with Portuguese giant Benfica.

With Benfica’s competitive squad, and with Almeida yet in his early developing stages, Benfica’s technical staff felt  it would be better if Almeida went on loan to get regular playing time and senior experience. He was loaned out to UD Leiria where he spent just half the season before being recalled during the winter transfer window by Jorge Jesus.  The following season Almeida became a feature in Benfica’s squad, stepping in for the inconsistent and sub par form Maxi Pereira, appearing in a total of 40 games, while being Jorge Jesus’ preferred choice in domestic and European competitions alike.

Despite ending the 12/13 season as Benfica’s starter at right back, an end of season that included an appearance in Benfica’s Europa League final against Chelsea, Almeida saw less of the pitch this past season, having only played a total of 25 games – most of them in the second half of the season – a far cry from the action he had seen the year before.  But his consistent performances, and his contributions to Benfica, especially in the final third of the season, earned him a spot in Paulo Bento’s final 23 players.

Although not a regular in Portugal’s youth setups, Almeida featured in Portugal’s U21 team before making his senior debut in October of last year. Andre Almeida started in a double World Cup qualifying  fixture against Israel, and Luxemburg where he logged in all 180 minutes.

His flexibility, consistency and tactical understanding must have made an impression on Paulo Bento who decided to call Andre Almeida as his 7th defender of his 23 man squad. Some pundits argued that Bento should have called natural left back Antunes, especially when center back Ricardo Costa could also deputize on the right side of the defense, but Andre Almeida – who has also played for Benfica at left back – has proven he is more than capable to fill in Fabio Coentrao’s vacant spot.

Originally a holding midfielder, Almeida uses his experience and tactical awareness to bring solidity to the fullback position. His positioning still lacks at times, but his game reads, and the ability to deliver the right pass out of the back, prove to be valuable assets when he is on the field.

Almeida will be on the left side of Portugal’s defense for the injured Coentrao when Portugal takes on the United States this Sunday, he may not provide the creativity and the attacking prowess Coentrao provides, but he will provide consistency, and for a Portugal team who is looking to rebound from a tough loss against Germany in the first round, consistency ahead of risk may not be such a bad thing.