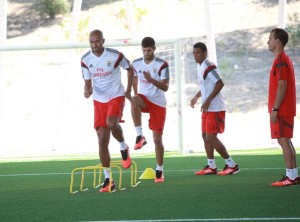 Benfica got their season underway this past Thursday, after the customary physicals(Thursday), and strength tests(Friday), the team will step on field #1 at the Caixa Futebol Campus for the the first time in the 15/16 season this Saturday.

Reporting to pre-season camp were the following players:

Artur finished his contract with Benfica this past June, the club opted to not renew with the Brazilian. Bruno Varela should join this group to compete with Ederson for the #2 spot. The “B” team keeper was in Servia with the U21 NT and has been authorized to report at a later day.  Paulo Lopes will surely continue with the club as the third keeper.

Eliseu who was part of Portugal’s double fixture after last season has been authorized to report later. Lindelof who was also in the U21 Euro with Sweden also has authorization to report later this month. Sidnei was not in attendance, and there are reports he will be making a permanent move to Spain. 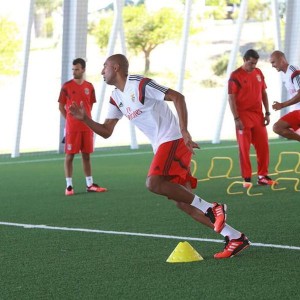 Salvio, and Gaitain. Gaitan missed his connecting flight from Argentina and reported on Friday morning.

Absent from the first day were Pele(ex-Belenenses), and Diego Lopes(ex-Rio Ave) these two reportedly on the “loan out” list to get regular playing time. Fejsa, Nuno Santos(ex-B team), Samaris, Jhon Murrilo(ex-Zamora), Mukhtar, Ruben Amorim, Djurici(loan at Southampton), Ola John, and Pizzi will be reporting in the coming week. Salvio is recuperating from ligament surgery.

Rui Fonte is still recuperating from an injury he picked up at the end of last season. Goncalo Guedes, and Jonathan Rodriguez will also be reporting at a later date after both were on national team duty. No word on Bebe or Djalo, both should be on the way out. There were a few reports this past week that Bebe had permanently signed with La Liga side Rayo Vallecano.

Certainly quite an extensive list for Rui Vitoria to evaluate in the coming weeks. Gone are Loris Benito and Sulejmani, who were both sold to Swiss side Young Boys.