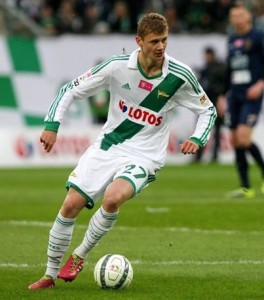 The first time you see Pawel Dawidowicz on the pitch you can’t help but to make a comparison with Nemanja Matic. His slender build, tall stature, short hair, and fair complexion are all physical traits they both share, but the similarities don’t end there.  It’s easy to find footballing bits and pieces of Matic in the 19 year old Dawidowicz, albeit at an early level of development off course.

I’ll be honest, I don’t know much about Pawel’s football history, I searched You tube, and  I was able to watch a few highlight clips of his, along with  45 minutes of game play against a second line Barca during last season’s pre-season.  Pawel is a natural defensive midfielder, who can play both as a holder and as a pivot. His long legs benefit his tackling efficiency, often allowing him to get a piece of the ball even when the attacker holds position. His long strides also help him get to a decent amount of 50/50 balls ahead of his challenger, whether to make a crucial interception, or to disrupt an attacking play.

Speed wise, he places slightly above the median, his long strides work in his favor while in his immediate range of action, but he will have a hard time chasing down a winger on a coverage play. His technical abilities were what impressed me the most, namely his first touch, which always seemed tight, and his ambidexterity, which allows him to go to either side of his body with the ball seamlessly – two crucial and important traits for a player in his position.

There are still  a lot of rough edges to Pawel’s game, such as wrong positioning, occasional ball watching, and a few others involving tactical aspects,  but none that can’t be improved with coaching, especially at the hands of JJ.

The big money question is – where will he fit in next season’s Benfica team? There have been some reports that Dawidowicz will end up with the B squad, my feeling is that he will be part of Benfica’s pre-season, and depending on how pre-season goes, he may very well end up with the main squad. Fejsa, who underwent surgery after the end of the season, is rumored to only be back in January, while Ruben Amorim and Andre Almeida will be reporting to camp late as a result of their national team duty. Taking those 2 factors into consideration, Dawidowicz is the only defensive midfielder available to JJ aside from B teamers Lindelof and Ruben Pinto, this off course assuming Benfica wont pick up a defensive midfielder in the market between now and the start of the pre-season.

Dawidowicz is far from being the finished product, but at his young age he exhibits the technical fundamentals that can make him a very good player. From the little I have seen of him, I can confidently say that he may be too good for the B team. I don’t expect him to be part of  JJ’s starting 11, but I do expect to see him in the same understudy role we saw Matic in, while Javi Garcia deputized Benfica’s midfield.  JJ will know exactly how to mold Dawidowicz to the defensive midfielder position that is so crucial in his system.